It is fell-running's answer to the London Marathon: crowds of runners at the start, a jostling squeeze through the narrow streets of...er...Little Town...and of course, the prospect of being overtaken by a man-sized broccoli. Or at least I thought I was. Must have been hallucinating.

A race of immense scale and proportion, the Anniversary Waltz seems to have grown into a legend. And each year, more people are drawn to running the Waltz. With a sell-out field of 400 and something, it's also one of the most supremely organised of races.

But perhaps it's most enduring quality is that, well, it is quite enduring. There's a point on the race (for me, around High Spy) where the physical side just melts away and all that is left is a mental struggle. The pain barrier is hovering close at hand, and all you are aware of is this primeval battle of mind over matter. An altered mind state that would have a street value of a good deal more than the 6 pound entry fee. 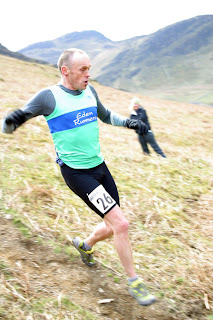 The crowd was so big that it's anyone's guess how many Eden Runners there were at the start, but I think we all had a great time. Here's Anth on his way down Robinson (photo courtesy of Borrowdale Fell Runners). Go to their site to view other photos if you must, but viewers should be warned that there are scenes which some may find offensive...(why are fell running photos so unflattering?)
Posted by Rhiannon at 9:05 AM

Wow. Not seen the results yet but trust all got round, safe and sound. Did Anthony (see photo)carry that little bloke around with him all the way?