USING THE LAVATORY OUTSIDE 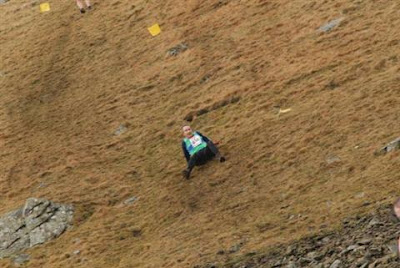 Hows that for an attention grabbing headline - the blog's really about the Kendal Winter League Race at Barbondale just at the southern end of the Howgills, but.......................................................
on the way there we had to stop for a toilet break at the beginning of Barbondale, a lovely unspoilt valley.
We rushed into a wood by the roadside to use the facilities, myself having finished quicker than the girls (for obvious reasons), I couldn't help but notice the different 'styles' - Rhiannon had adopted a 'bear in the wood' approach, she went so far into the woods she was invisible; Sally went behind the nearest tree ( here's a tip for next time: Just because your heads behind the tree don't necessarily mean your backside is too!) whilst Mrs D-S-D adopted her usual approach of 'Sod it, I'll just drop my keks and crouch wherever I happen to be standing'! ( Note: this is acceptable in the great outdoors, but not when shopping in the Trafford Centre)...

On to the race - Rhiannon has at last realised that her generally inaccurate course summaries prior to the start were having a bad effect on my morale, and restricted herself to 'Up, along a bit & back the way you came'. The hill we had to run up was covered in cloud so we could only see the first 100 metres up, but at the start it looked like we were facing a vertical wall of grass.

I took a fall as Rhiannon drew level and tried to put me off my stride by mumbling to me in words I couldn't really understand (oxygen deprivation), but I'm sure I heard her laughing!

Lungbursting and relentless, we climbed up into mist and low cloud, until an eventual respite and short run out on the level to a cairn and back again to the descent.

Any steeper and I would have wanted a rope and ladders to get back down, but, here's the joy of this race: just as my legs were screaming for mercy, I slipped at the top of the steepest part of the descent, and, with junior spectators shouting 'SLIDE! SLIDE!', I lifted my feet off the ground and slid down 200 metres on my backside - Brilliant! (the only downside to this was the decision of what to do with the marker flag racing up towards my spreadeagled legs - answer: reach out and grab it before it hit me in the particulars!).

After we'd finished the cloud lifted to reveal a 'hog of a hill', I can honestly say that if I'd seen it all before the race, I would have developed a hamstring twinge, athletes foot, achilles tightness, or an urgent need to get home for a meal which woul dhave saved me from the hill!

Another great race, and on the way back we stopped for a drink. Stu had told Rhiannon there were two pubs on the road back to the M6, one a real old fashioned front room pub with great beer and atmosphere, the other nowhere near as good.

We picked the wrong one!

The Fell Fella
PS On the drive back we realised the outdoor toilet wasn't a wood, but the 'Tradesmans entrance' to the grounds of a large country house, so apologies for that..........
Posted by Andy S at 11:44 AM

Painting pictures with words Andy, once again. Good to see that Sally is back to competing, or is it just 'running in the same direction as everyone else when there just happens to a race on'?