Spikes or No Spikes, that is the Question!

After 3 years at Eden Runners, and 3 successful / clarty xc seasons, I wondered what I could give back to the club. So, on a miserable, clarty, muddy run around the bustling metropolis known as Bitts Park, it dawned on me 'hmm XC Ladies Captain', quickly followed by another thought of 'I fancy a new pair of trainers', then 'I think I just swallowed a bluebottle'...

And so it was, at last week's AGM, somewhere between 'the chips are ready' and 'where the hell are my car keys', I was sworn in, ready to take on the challenge of inspiring Eden's womanhood into venturing off the hallowed tarmac of Penrith and into Cumbria's deepest, darkest fields. I had my work cut out, as first race was only days away – Maryport XC. As I hadn't run it before I had no knowledge of the course, but with a good dose of 'you'll all enjoy it' attitude I plugged away on a propaganda campaign the world hasn't seen the likes of since a short moustached Austrian man decided that Germany could do with acquiring a few new countries in the late 1930s...

Task number 1 - how to convince people to go to Maryport. Well, erm, its near Allonby so you can get a decent ice cream, it's got some nice chip shops, and it's handy for Flimby's New Balance shop in case you fancy a new shiny piece of running kit. Then I had to remember, getting to Maryport wasn't the aim of this task, it was to get people there, to glide / huff and puff / swear their way round Netherhall's finest sports fields. It was going to be difficult, not only had those people behind the Lowther 10k decided to stage a much more appealing / friendly / less chance of breaking an ankle type of race the day after Maryport, but also the people behind the National Road Relays put their 'rival' event on on the same day! OK, not going to be a record turnout I thought, but at least its a base to build on.

So, the day of the race came, a late course inspection by the legend of all badly attended Cumbrian Races, the one and only (no Chesney Hawkes sing-a-long required) Noel Hakeman, led us to be informed that the usual course had been abandoned due to some bits being impassable. Ah, a nice flat outing then around the playing fields then. By the time we had registered for the seniors race, the junior races were well under way, Eden vests gallantly doing battle with the other clubs, and doing rather a fab job of it too. Great, no pressure on the seniors to repeat the spectacle then hehehe. In no time, we were ushered to the start line by Noel, exclaiming “is tha ready then eh? Go!”

5 and a bit laps of the course stood before us, the view from the first pack (Eden's contingent had opted to go for the 'hares' pack – the 'bloodhound' group looked way too fast!) was a nice one. As usual, I tried to hold myself back a little, reminding myself 'theres another 4 and a bit laps to go', when out of nowhere, Pigeon Pete came bearing down on me. My first thought 'oh bugger those marathons have knackered up my pace!' so I floored it away. It turned out later on he did it on purpose to keep me on my toes hehehe – nice one Pete! As the laps came and went, John Andrewartha was putting in a stellar performance, streaking off ahead with the signature big grin on his face. Chris Bunker and myself fought it out near the front for a couple of laps, I finally started to pull away and he proclaimed “well done Eck”, I was wheezing like a knackered accordion but managed to splutter out a “well done” in reply. As I rounded the final corner, I spotted the finish in sight, and shuffled my way to the line. Job done, the Eden Three all home and all still smiling. Smiling not because we knew the pain of xc running was over, but because there was cake waiting for us in Herman the Tea (VW) Caddy.

Over at the Eden Tea Caddy, we were greeted by Chris's lovely Eden Runners Cake, complete with green and blue icing. As we merrily stuffed our faces, showing Herman with crumbs, we noticed a couple of CFR and Derwent AC runners who looked rather hungry and ushered them over. Their faces lit up, as thoughts of racing weight and strict diets were abandoned in the blink of an eye. Then, out of nowhere, the Border Reivers, aka Pete and the kids, descended to seize the remains! They have requested for the next race we make a Harriers coloured cake for them – I will have to check with UK Athletics on the procedure for second claim club cakes, as I would hate to breach one of Lord Coe's rulings – heaven forbid! With runners fed and watered, everyone smiling, and the leftover icing packed off with Pete's kids, all that was left to do was to trundle home and plan our next xc outing – Burnley XC on 26th October. Be there, or be square! 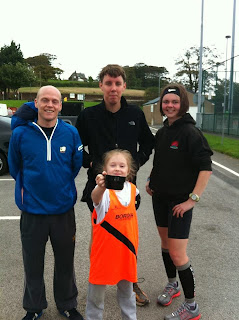 Great Hezzy, not seen the word 'fab' used since the 'crap four' from Liverpool were re-named!