Running Through Mountains of the Mind 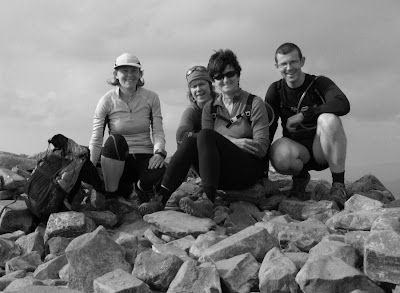 Andy Ramsay and some of the Leg 3 pacers

It's been said that life is really just a series of wonderful opportunities disguised as impossible situations. And as with life, so it is with running. If there was one endevour that epitomised this above all others, it would be the Bob Graham Round.

A 72 mile circuit over the tops of Cumbria's highest fells, it conveniently has the same amount of ascent as that of Everest. The catch is to complete this in under 24 hours. It is impossible, and more so, inconceivable to most. To many, it becomes an obsession. And to a few, it becomes the wonderful opportunity in disguise.

To say that this insanely long run takes it out of you might be an understatement. On a run this long, such a sustained onslaught on your system, your physical ability becomes a mere background to the current of your own thought. The mind (and dare I say it, spirit) are put squarely on the line. Anyone who's read Richard Asquith's Feet in the Clouds will know how it goes.

Seventy six years to the day that Bob Graham first set out in his pyjamas, shouldering a big bag of hard boiled eggs, Eden Runner Andy Ramsay (pictured at right, above) set off to complete the round. Armed with sandwiches (not too posh..no sundried tomatoes round here) and a lot of energy drink, he was guided round the route by a host of Eden Runners with all their hopes pinned in one place. As each leg was completed, the pacers breathed a sigh of relief and handed over their cargo to the next. There was a sense of trepidation as the Leg 3 pacers saw Andy, Robin Gillespie and Dave Owens charging off the foothills of Helvellyn. So much so that some of us decided to start the leg early in case we held him up. It all went wonderfully well, though. Even clagged in summits could not halt the Ramsay machine as Penny's supercharged navigational skills kicked in ("now...at the thirteenth cairn, we need to bear 190 degrees")...

So next time you're in Keswick late at night, and you see someone staggering on their feet, throwing up with a bottle of champagne in their hand, it might not be all that it seems... they might just have seized a wonderful opportunity out of what looks like an impossible situation. They might have just completed a BG. 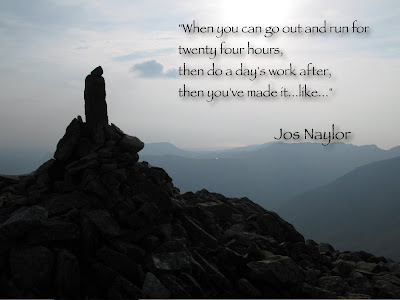