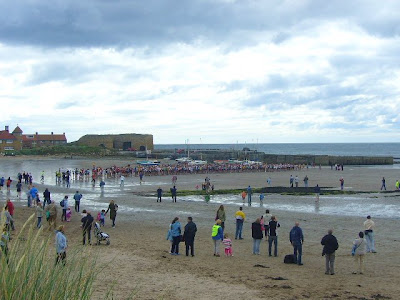 Beadnell, on the Northumberland Coast: Sunday 20th July 2008, around 10.30am. A fine, clear morning with wide horizons and huge expectations. From my vantage point on the dunes, I had no idea what the man on the beach with the megaphone was saying to the assembled hordes stood facing him. He said some words, which drew a cheer and some applause; he then repeated the feat - more cheers and a ripple of applause. His words were carried out to sea on the breeze, where they foundered somewhere near Whittingham Carr Faggot (no, get your own map, chancer).

I think he used an air-horn to start the race. I say I think, because I was being mugged by two brothers (aged around 3) at this point, who tried to steal my bike, then my map. By the time I'd finished backfilling the hole the race was underway, and I was on my bike before I had time to let anyone know where I'd buried the Tiny Kray Twins. At least they hadn't got my bacon sandwich. 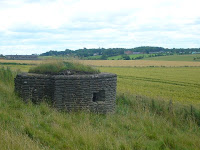 ...Julia was determined to defend her Championship lead to the bitter end....

I followed the race route through the village, past the harbour & up the hill, eventually coming to a halt at the gate onto the cliff top. No way through for blokes on bikes, not today. Retracing my tracks, I took to the road to try to meet the race again at Howick, where the route rejoins the tarmac for a while. On the hill out of the village I passed a cyclist wrestling with a mechanical problem, looked like a snapped chain. I should have stopped and offered help but I was on a mission. Sorry, whoever you are. First I caught up with Andy, then Sally, then Gill again - all running strongly. The route then switched off road again, using narrow tracks which forced me to ride alongside the runners for a while. That was a bit odd. These people were working really hard, which isn't a surprise in itself, but it didn't really occur to me when I was one of them. At least 17 different people said 'That's cheatin' as I rode past. (Note to self - always resist the temptation to state the bleedin' obvious.) When we eventually made the road again, I managed to catch Paul, still smoking his metaphorical cigar. Julia was even further ahead. (Julia had fitted a set of wing mirrors so she could monitor Paul's progress. Of course, the mirrors bore the legend 'Objects viewed in this mirror may be larger than they appear to be'. She also has a scanner which alerts her if any other ladies in her age group are within thrashing distance. But it's only for fun, of course). I caught Julia just as she turned left onto the beach for the final section. 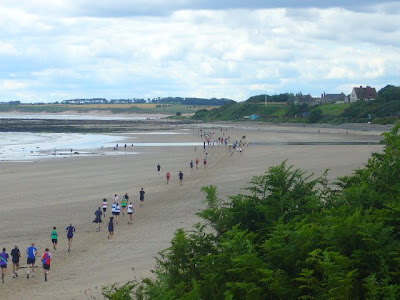 It was back to the long way round on the road for me, 4 miles of struggle to Alnmouth to make the finish in time. I missed Julia crossing the line, but dashed onto the dunes in time to see Paul strolling in. Picking the bike up, I fell through the dunes and between the tank traps, made it onto the wet sand and pitched up on the finishing straight. Right opposite me were a gang of runners & supporters from Barrow Runners (not that Barrow, it seems) who made it their job to give massive encouragement to everyone, not just their own team. Very uplifting. Gill came next, still smiling of course (well, it could've been a grimace I suppose), then Sally, and then the Legend That Is Kevin. Next home was Karen Cummins, still with headphones intact, storming across the sand like a little whirlwind. Tony came in next, digging deep (one of his en route sandcastles on Embleton Sands has, I hear, been listed for this year's Turnip Prize) And finally Andy, battling against injuries the nature of which changed the further he ran, came home to resounding cheers from the Green and Blue hordes. Handshakes and hugs all round. Amidst it all stood Paul, wearing a coat which made him look like he was between shoots in a remake of Randall & Hopkirk, asking 'When do I get my prize?' Of course, he was referring to this :

which is the ER Road Championships (Male) Trophy. As you can see, no expense spared.

Predictably, there was a post-race press conference. When pressed, Tony put his late arrival at the finish (!) down to having saved himself for the last 0.3m of a 14m race. The course distance was 13.7m on the day. He was wearing shoes which he said he now remembered putting to one side for a good reason. His blisters looked like wine gums. Andy thought he'd probably never run again, until Tuesday or Wednesday anyway. Gill later confessed (at least I think she did) to having walked some of the route, but no witnesses came forward. Sally had run most of the way, only breaking into a leisurely walk on a couple of occasions. One of Paul's toenails had almost come off, and, like the 6 year-old he is, he showed it to everyone with great delight. Karen really likes the seaside, and thought we should stay all day. She was also well impressed with the race t-shirt. Kevin expressed disappointment at the catering arrangements. Well, he kept asking 'Where's me muffin?' and I can only think that's what he meant. Well, Kevin, here it is....


It had been a day when, as a sometime cyclist, I felt proud to be a runner. More than that, proud to be an Eden Runner. Next year, I hope to leave the bike at home.

"Alan Marshall is without dispute the best running writer in Penrith today...well, apart from Andrew Bell, who's also quite good.."
The Cumberland and Westmorland Herald

'Alan Marshall is without dispute the best cycling writing runner in the world today' (We've not seen Andrew Bell on a bike, though, come to think of it I have seen a bell on a bike..............

''I am Alan Marshall'' Spartacus