The Silence of the LAMM 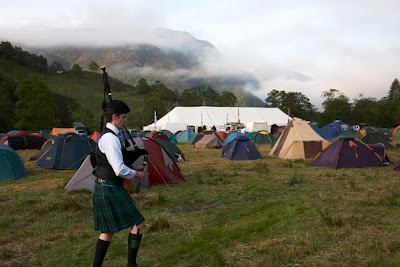 I am conscious of a strange noise dragging my brain from 2 hours of fitful sleep. I can’t place it. It’s an unusual noise to hear at 5.30 am. And it’s very close to my head.

Somewhere in the back of the brain, there’s a synapse of recognition. You get woken up with bagpipes on the Lowe Alpine Mountain Marathon.

THE LAMM? How did this happen? The panic slowly subsides as the memory comes back. It’s not a horrible dream. Penny and I did enter the LAMM.

Outside, the midges are amassing in numbers. . Everyone’s got black midge nets on. It looks a bit like an outing of 900 suicide bombers. I put mine on. It’s marginally better than not having one. For a brief moment I snigger at people trying to conduct normal morning operations through nets. Brushing teeth. Drinking tea. Eating midge-flecked porridge. Then I try it for myself. I scrape the raspberry smoothie stalactites off my midge net and make a mental note to bring a straw next time.

Well, this is it- the start. The sun seems to have moved closer to the earth, it’s baking, and there are still midges making the most of this unusually large feast. They probably haven’t had so much fun since the Battle of Culloden. 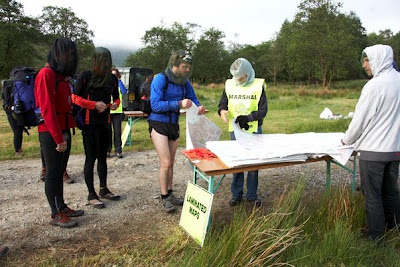 We’re nearing the second check point. We’ve been contouring a deeply incised hillside for 2 hours. We crash down to a stream and drink like wildebeest.

We’re looking for a checkpoint. It's not here. It’s the worst possible place to lose a checkpoint- a series of enormous hummocks. It could be any one of these monsters. Backwards, forwards we trudge. I can feel the will to live leaving. I have started to stop caring. Then a strange thing happens. I start to worry about food. I haven’t got enough. My brain is going, I think. Has my body had enough, or my brain?

“Charles!! CHARRRRRRLESSS!!” An elderly man behind is shouting at the top of his lungs. He’s miming the international symbol for a checkpoint to his partner, although it seemed a little superfluous. He’d attracted the attention of everyone. Including us.

One more in the bag, but I’m feeling like an empty shell. I confess my food concerns to Penny and tell her to leave me to die right here. I can’t go on.

She makes me sit down, feeds me a breakfast flapjack. Takes some weight out of my sack. She knows what’s happened, and deals with it. The experience of an Alpine mountaineer.

It’s been the hardest 11 hours out on the hill in a long time. A tough decision had to be made to climb up and over a set of Munros, not down the valley to disqualification. Walking like an empty shell, nothing left inside. A never ending, drawn out pain. The silence of the LAMM.

We pass a number of teams, equally spent. Penny seems completely unaffected by the ordeal, and even finds a spurt of energy at the sight of a female team in the distance. I feel like a shambling mess by comparison.

Every last atom of energy has left my body. Penny has got outside of her rations, while I cannot eat a thing. It’s a bad sign. The midges cluster around the squashed remains of the raspberry smoothie.

There’s the disappointment, but there’s also a strange sense of having learnt a great and valuable lesson. To know where our limits lie is a powerful thing. Do we learn more from our successes, or our failures?

The course planner, Andrew Spenceley tells us that our course had twice as much ascent on the first day as it would have normally. It makes me feel a little better about having scraped the barrel of my endurance and my being. Now, a month later, the pain has gone. And what are the memories? A perfect herd of deer thudding close by, the light splintering through pines, the dance of a thousand folds in the rock, pressed by unimaginable heat and time as we ran past in a moment. 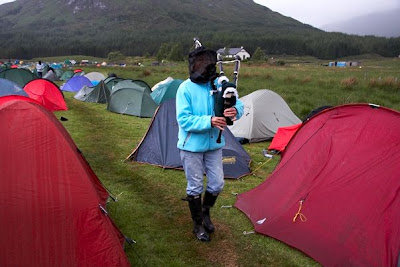 The piper digs out another tune from the wheezing bag.

Okay, so the midges really WERE that bad and MORE but don't let yourselves be put off... anyone can enjoy the Mountain Marathon experience happening on a hill near you!

Isn't the human being an odd concept.....?If you had to describe your own idea of Living Hell, you could start with this harrowing report.

Still, I see that you both got a namecheck in Athletics Weekly, which is more than can be said for most of us.

Curiously, though, the most difficult of experiences can mature like a good wine in the memory- and leave you with a taste for more.

In a world chock full of instant gratification, there's still room for experiences that aren't great until they're over...like a trip I once had to India...

Wouldn't have missed it for the world..did it sound that bad???