Battle with the elements

From our intelligence gained the night before we knew the elements were going to fight dirty and where planning to use some of their most fearsome fighting units Wind, Rain, cold and an elite unit called mud. Our small unit was made up of three Highly trained athletes ,a seasoned veteran and team leader (codename Karen), recently recognised as most improved by his platoon (codename john) and a late recruit code name Anne .Early on Thursday morning Karen and myself( John) set off under the cover of darkness to our first secret rondavue just outside Carlisle to pick up Anne at 0900 hrs. Our unit now complete we headed for the secret RAF base in the middle of nowhere called Spadeadem for our briefing (most of which is classified) at 10.00hrs.We meet other hand picked men and women from all over the country who were prepared to join forces and take on this challenge .We studied our maps and instructions carefully as we didn’t want to take any wrong turns along the way .At 10.55hrs the officer in charge gave the order to proceed outside . We gathered at the edge of the base and no sooner after the commander had finished his words of encouragement the battle began ,a single shot whistled over our heads, it was time to go.

We all set off as a tight unit at first heading up a gentle hill on a tarmac road. I settle in behind Karen, my usual position. We passed the first two check points in good time and before long our path change direction and we where on forest track and in the cover of the trees. We passed several abandoned rocket launcher and rusting tanks scattered along the track and it was at this point that we thought we were all gonners as a loud explosion shook the ground around us and we all ducked for cover we where definitely in a war zone. After regaining our composure we pushed on. We had good cover for most of the way and the elements weren’t affecting our progress but that wouldn’t last for much longer, after a long steady climb I could see that the cover was about to end and we where heading for open Moor land. We had no choice but to make a run for it. No sooner had we broke cover we where attacked form all sides. Some of the rain and cold had combined and form a splinter group called hail stones, and they were using needle-sharp skin piercing ammunition. And being fully exposed we were easy targets .Our specially design lycra and thermal clothing gave use some protection but our faces took the full force from the hail stones which where being supported by the wind. We kept our heads low and pushed on .The constant barrage seamed to go on for ages and it was at this point our unit began to break up, it was every man (and women for themselves). I made it back into the safety of the trees and it was then I realised Iwas on my own I soldier on.I soon passed two more check points 9+10 and things starts to go down hill, Karen was way in front now and I could only just see her in my sights I turned round to check on Anne but there was no sign. Had she succumbed to the elements ? I know she wouldn’t go down without a fight.

With the wind and rain gathering in force the elements knew we would be tiring at this point and laid an ambush on the track, yes the mud was lying in wait, ready to take us down. Karen was the first to take on the mud and like a knife through butter she ploughed through, mud splattered everywhere she made it look easy but she had been in this situation many times before. As I approached the mud my legs were getting heavy and wasn’t sure I was going to make it . The mud was doing its best to trip me up using hidden booby traps and water filled pot holes .I battled on and came throught the conflict relatively unscathed.
I was soon back on the road and passed the 12th checkpoint I could see in the distance the safety of the base. As I got closer I could see the waiting crowd ,and with admiration and relief that another one had made it back they cheered and applauded. The commanding officer was there to congratulate us and award us with a medal for bravery and endeavour. But relief soon turned to anguish as we realised that Anne was still out there.

We waited and waited looking into the distance for Anne but there was no sign, had we lost one of our comrades to the elements, our hearts began to sink. Then we spotted the green and blue camouflage vest and with fight and determination that we have come to expect from Anne she fought all they way to the finish
It had been a successful mission and in the officers mess afterwards we drank cheap beer at a pound a pint and ate free pie and chips (these where RAF pies the lids were securely fastened-Andy) and laugh and joked about our victory. Was that the best that the elements could throw at us! 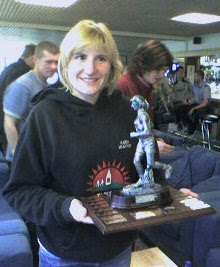 The commanding office awarded those who showed outstanding performances in the field and Karen was given the Victrix Ludorum the highest honour .Karen said it’s the best thing she had ever won but her jubilations soon turned to disappointment as she realized that she couldn’t take it home to show the rest of the troops. As it had to stay on the base, permanently on display for others to remember the men and women who turned out that day .
Posted by john b at 10:53 PM