Twenty Falls But No Submission 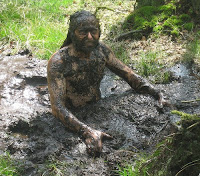 An account of the Langdale Horseshoe as seen from the rear of the field.

Well, I had run badly on the previous Sunday, staggered around Coombe Woods at Armathwaite on the Thursday; I was definitely coming down with something. I was viewing snotty children at work with suspicion… it was inevitable, I was obviously going to BE ILL – I had found an excuse not to run the Langdale Horseshoe on Saturday.

Unfortunately, the unrelentingly cheerful Andy Ramsay rang me on Friday night to see if I was running. ‘Well…’ I muttered about my declining health, the bad weather and then fobbed him off with a ‘I’ll watch the weather forecast and then think about it again’. Second bad moment of the evening arrived in the form of a cracking weather forecast and smiling weather presenter. Really, I couldn’t be malingering at home whilst there was a race to be run… I rang Andy back ‘I’ve changed my mind’ He sounded mildly surprised – doesn’t he know about the female prerogative?

In the way that these things happen, I next found myself slogging up to Stickle Tarn at the rear of a very large field of keen looking runners. ‘Ha!’ I thought ‘They’ll not be looking so fit by the time they get to Pike O’Blisco’. So, working on the principle that it may well be a long day, I made no attempt to overtake anyone, settling instead for keeping Andy in view and relishing the fact that the man with the bad leg I had managed to pass hadn’t yet caught me up.

And so time passed.

As the morning wore on it became apparent that the main feature of the route was going to be bog. Having had our compulsory Cumbrian pre-race 24 hour deluge the back of Thunacar Knott now resembled the Everglades (but with no trees or crocodiles). It was when the chap ahead of us fetchingly attired in bright orange vest and shorts vanished up to his waist that we paused slightly in our downhill trajectory. This gave Andy enough time to leap onto a quaking raft of moss. As it shivered gently, threatening to cast him adrift across the fathomless boggy depths his army survival training kicked in and he leapt manfully from the watery trap. His Ron Hills greedily sucked up the moisture, threatening to drag him back in, as he staggered knee deep at the waters edge. Luckily, Andy’s foresight in carrying an empty bottle up the hill to save weight in his bumbag meant that he did not complain one jot about the extra two kilos of water he was now carrying in each leg of his trakky bottoms. In the meantime day glow man had successfully extricated himself from his sphagnum grave (presumably employing some useful Ray Mears techniques) and was valiantly struggling on although his ability to fluoresce had taken a spattering.

We reached Bowfell and passed a few more people. Then the Crinkles. Considering our position at the rear of the field I was impressed to find a bottle neck of half a dozen people skittering about at the top of the ‘Bad Step’. Who cared if you might break your neck – just get down tha’ bloody thing. I found myself slipping into dialect as Andy and I skipped stylishly past the small crowd, effortlessly downclimbing into the gully below, the whole seamless performance I felt, reflecting well on our Eden Runners vests. Then Andy fell over again. Having survived the short rock climb he chose to plummet face down with some force onto the rocks in the gully below, startling a number of other runners (however failing to trip or injure any of them). With nobbut a commando roll and a curse he was up again and off.

It was at this point that I started to get really bad period pain. I began pathetically asking random runners we caught up with ‘Hast tha’ any painkillers?’ they shook their heads blankly – either they had no paracetomol or they couldn’t understand my accent. This was getting really bad. Normally I would be in bed with a hot water bottle and some very strong drugs – instead I was three hours into a long run and I wasn’t near the finish, worse still, Andy was still smiling, even though he kept falling over. It was downhill but I felt like walking; I wanted to go home, but sadly Pike O’Blisco was in the way.

I was temporarily heartened by the sight of a young man bent double in the stream. ‘Are you okay?’ I courteously enquired. ‘Cramp’ was the agonised reply. Thus encouraged by the poor chap’s inability to move at all I continued with my slow progress to the final evil ascent of the race. Trying to ignore the fact that the Prize Giving was probably already underway I valiantly sucked the last remnants of Go-gel from my supply and staggered on. Another man with cramp ground to a halt – if only they had periods, then they’d know what real pain was! Heartened by the demise of another competitor I pushed on flicking Andy the V’s in return for his cheerful encouragement.

Time passed and then that moment in every fell race you’re waiting for… the sweet call of the final descent. Nothing now lay between me and a long lie down except a quick romp off the hill to the valley. I perked up. I could run through my pain. My pace picked up. I could smell the valley. I was strong. I was invincible. I was nearly taken out by Mr Ramsay going down yet again, this time in a stylish sliding tackle, embracing the quagmire full on. All credit to him – he just kept on getting up again even though it quickly became obvious he was not going to make it to the finish without fully engaging with all aspects of the slope. Time spent practicing aquaplaning is seldom wasted and it was here that the young Ramsay’s weakness in the standing glissade was revealed. For me though, it was full steam ahead. Looking over my shoulder Andy somersaulted neatly, performing a full forward roll over a particularly slippery bit – the man was developing real style.

Finally we hit the tarmac of the valley road and Andy was, at last, able to remain upright. We pounded into the taped funnel with only slight confusion as I was resisting a strong urge to run directly into the bar. There at the finish my mildly bemused parents (from Lincolnshire – no hills) were waiting to carry me off to the prospect of a hot bath, clean clothes and civilization (okay at this point I admit I’m exaggerating). I slipped back into dialect ‘Hast tha’ any painkillers mam?’

Disclaimer – the fact that Mr Ramsay was not able to remain on his feet was due largely to the footwear he was wearing and not to any naturally inherent inability he may or may not possess.

Blog post by Penny Clay
Posted by Rhiannon at 2:29 PM

Very good Penny. Andy's shoes sound like they'd be ideal for road running, or maybe ski-ing. I wonder if he's thought of patenting the idea of a Running Shoe with no discernible grip whatsoever?

Personally, I'm glad that blokes don't (directly) experience period pain. Can you imagine what Boots The Chemist would look like of a Saturday? It'd be more like Halfords, or Machine Mart. A whole new world of painkillers would be needed too, to cater for the macho market. Or maybe not, as of course we blokes are proper hard.

Aye well, I think I'd rather have the period pain than have to put up with me with PMT!