A nuclear submarine patrols the entrance to Alnmouth bay, Sunday 07.30am. Or could it be Coquet Island?

Alnmouth, 7.30am Sunday 12 July, 2009. Having been immaculately driven across the slumbering heartland of the True North, four of us leapt out of the car onto the beach-head dunes. Everyone I ever knew always stands and just looks at the sea at such a moment, as if recalling a time gone by when it was not called The Sea, but was Home. With time to admire the scenery, we looked for the finish line. And there it is... 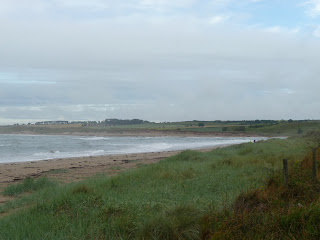 ....competely deserted. We would return several hours later, by which time the sea would have retreated, driven back by a tide of humankind. Nearly all of whom, eventually, would be smiling. We wandered up past the little golf course and through the streets of the village. Already there were runners, making calls from mobiles or buying newspapers.

..that’s club-night catering sorted for the foreseeable, then ....The Red Lion, Alnmouth.

Over the bridge across the River Aln, inland towards the race carpark and the buses to the start. A helpful lercal chep advised us that registration was about a mile that way. Thanks mate - we knew already, but we must have appeared lost, or at least unsure of ourselves. No matter. The first bus left just before we arrived, but there were plenty of buses, and we stepped onto the next one. With the bus filling up, we were joined by Joanne & Craig, fresh from their Ironman exploits en France. They related some flavour of their experiences, which formed an interesting backdrop to my second breakfast of the day, the banana sandwich. Gill also arrived at the same time, having joined the thrang from an overnight in Bamburgh. The 30 minute journey passed quickly, with glimpses of Dunstanburgh along the way, and soon we were off the bus and walking down to the harbour at Beadnell. In a change to previous procedure, we collected race numbers and timing chips here. 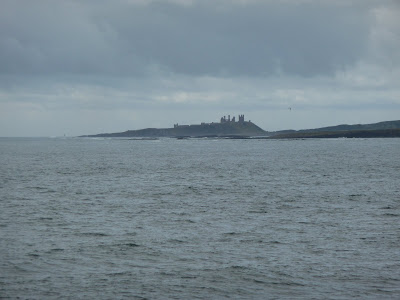 Looking south from Beadnell towards Dunstanburgh, about 4 miles as the arctic tern flies....or around 5 miles as the athlete runs. No Joanne, that’s not even halfway....

All was well organised, and provided you could remember how to spell your surname, you had no reason to quibble. Those who were to insist on quibbling later were, I have to say, victims of their own late arrival at the start. This fate befell some of our very own Eden Runners, resulting in some medium-grade flapping in the carpark before the start.

Not so for SuperKev though. Having overnighted in Newcastle, and already tidily parked, he went through his pre-race routine like the model professional he has become. Soon we were assailed, in the nicest possible way, by Karen C and Sally, who shot off immediately to collect their numbers. Julia and Gill DS-D were, apparently, somewhere in the queue for the Ladies. 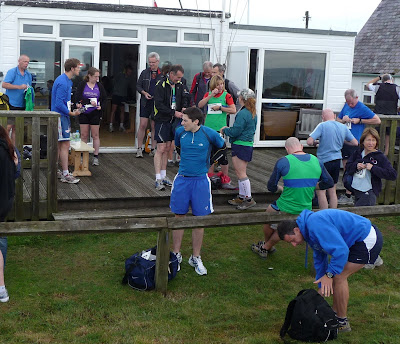 Having registered, Gill treated us to a medley of sea-shanties on the harmonica, which had John practising his robotic dance moves.... 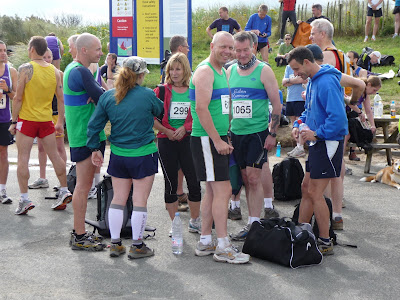 Gradually, through the discarding of layers of clothing, we became recognisable as runners. Some chose trail shoes, some said road shoes would be best. Several of us went for a pre-race coffee, going against strict protocol in some cases. Would it help, or hinder? We had our own on-team nutrition expert who gave a brief but dazzling insight into the importance of continuous hydration. We analysed, obviously, the various methods of attaching the timing chips to the shoes. Kevin was, if I recall, the only left-footer. Such interesting things kept us occupied as we waited for Julia and Gill DS-D, who were apparently in the queue for the Ladies.

Bags were zipped and fastened and placed carefully on the baggage bus. Empty coffee cups were placed in bins. Club vests of every colour combination clung together in huddles or wove their way through the crowds. A strange calm descended on the gathering, infusing us with an intangible sense of serenity. Except that, Julia and Gill DS-D were still stuck in the queue for the ladies.....

Suddenly, they were both among us with tales of omigod I thought we’d never make it, etc etc. And then the ‘5 minutes!’ shout was heard, and we funnelled through the dunes and onto the sand to the start flags. First part of challenge – get to the start line without your shoes filling with sand. This start is a bit like the Aintree Grand National, but without the tape. Hundreds of runners strung out across the sand - some already aiming for the very edge of the water to find the line of least distance, others just admiring the view. I laughed out loud at the lady to my right who said she was determined not to get her feet wet. I nearly told her to get back on the bus. She has no chance, I thought, of staying dry.

Whilst running through the Beadnell Bay surf (well, nearly) I must have passed Mr Paul Flynn, apparently there and shouting greetings to members of his former ER cohort. After maybe half a mile I became aware of the

sound of hundreds (or maybe thousands) of terns on and over the wet sand between us and the dunes. Silvery white, forked tails, little daggers for beaks, all protesting at (or maybe celebrating) our presence. Into an offshore headwind, and under the warm sun, we streamed south. It was interesting running – obviously lots of sand, but more rocks to skip round or jump off than I’d recalled. And water of course – impossible not to be soaked almost immediately, but refreshing.

We scrambled off the beach at the south end of Newton Links, through the dunes and quickly onto tarmac, skirting the mysteriously named ‘Football Hole (I think it’s where the ‘real’ NUFC has been tipped off the cliff, to be replaced by the current ‘car-crash’ version) towards High Newton, where the route veers sharp left and on to Low Newton by-the-Sea. I think we passed a pub here, which if true makes this surely one of the most idyllic pub locations anywhere. At 3 miles we are back on the sand at Embleton Bay, which sweeps south & east and is dominated by the somehow forlorn (I think) but inspiring ruins of Dunstanburgh itself. This stretch of sand is over a mile and a half, and my own race begins to become a struggle around this point. Anyway, off the beach, reed bunting singing somewhere to my right, along the undulating trodden path above the rocks, ending this section with a bit of a climb up around the landward side of the castle, away from the clamouring kittiwakes on the cliffs at Castle Point.

Still on trodden paths, the west walls of the castle above us, Craster soon hoves into view. Lots of support through the village. Special thanks to the tiny little girl who told me ‘..don’t worry there’s drinks round the corner’. There weren’t. She lied. I believed a two year old and was let down. Hmm. No wonder we all end up cynics.

Off the tarmac, onto clifftop path again, circumnavigating Black Hole, we ran on past Cullernose Point to rejoin the road just north of Howick. Then it’s onto grassy lonning as we head past Rumbling Kern, a drop down over a footbridge at Sugar Sands, a short sharp climb up and past Howdiemont Sands, taking care to note the rocks at Longhoughton Steel, Red Ends, and Boulmer Steel and onto the road before racing past the lifeboat station at Boulmer. Treading tarmac for another mile, eventually we were sent left and down a few steps onto the sand again. With a few drops of rain in the headwind, the skies visibly brightened as I removed my sunglasses. After running about a mile the direct line turned slightly to the west again, and we could actually see the finish flags – but they're a real long way off. Spectator numbers increased towards the finish, and a young lad of maybe 9 or 10 ran out to join his dad to my left on the run in. His little brother was left trailing in their wake, his plaintive wails lost on the breeze. Even though I was using every ounce of what I had left, I couldn’t make any ground on them. Ian is there near the finish trying to hide behind a little camera, but he is spotted. I stop running. A woman with a pair of pliers is waiting to remove something from me. I have no energy left to resist, so I’m relieved to discover that she only wants the timing chip.

The meltemi which blows offshore at this time of year soon began to cool us down, so those race t-shirts were a bonus. With such a large field there is always plenty of support for other competitors coming from many of those who have already finished. Our ER competitors today were John, Andy Wack, Tony, Kevin, Julia, Gill D, Sally, Gill DS-D, Karen C, Joanne & Craig. And me. We collect our bags from the buses over the golf course, and decide to reconvene in Warkworth, a few miles to the south, for refreshments. After some local parking-related difficulties, Craig led us to a fantastic courtyard cafe, where we lounged in the sun, refuelling with scones, lemon cake and that perfect finish, a mug of tea.

In fact, although well over an hour after I’d stopped running, I thought that this was easily the best part of the race.