MY TRI - THE PENRITH TRIATHLON 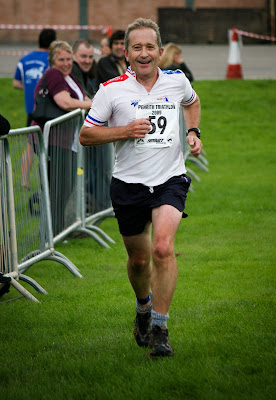 Well, if anyone's seen the photo (not the one above- thats been taken by Stu after I'd run a bit of weight off- thanks Stu!) taken of me in 'transition', you'll know that although I may not have been the best Chairperson of Eden Runners, then I'm certainly the f...f....f..FATTEST!

The photo has obviously either been 'photoshopped' to place my head on 'some other fat blokes body' or the photo's been accidentally digitally enhanced around the 'beer gut' area, not discernible in real life!

Anyway, I knew I was in trouble on Friday, having just decided to enter that day, when I couldn't get my bike booked into Arragons to get the dodgy gears sorted out until 7 September, hmmmmmm a little too late for my immediate needs.

Undeterred I dropped my entry off and awaited the big day.

Obviously I now know that forward planning is everything in the world of 'TRI', but being a novice, my advance planning involved: pumping up the bike tyres, and that was it. Oh, and my specialist TRI equipment preparation involved getting an old pair of shorts, threading a 'bit of string' (technical term us TRIies use ) taken from a fancy dress longbow, through the place where the elastic had perished in the waistband, and cutting the bottoms off the pockets to 'reduce drag through the water' (note the misplaced optimism that I'd actually create enough forward momentum to cause 'drag').

On the big day, I'd decided to wear contact lenses and hope they wouldn't come out in the water. Helpful advice from others made me realise that (a) they would and (b) I had to get some goggles. After shelling out another £8:50 for goggles (this was becoming a hugely expensive event!) I was ready!

But not quite ready, because as I prepared for the swim (taking my shirt off) I was stung by a wasp with 5 minutes to go before the swim - AGONY!

Here we were then, in the leisure pool (that's surely an oxymoron if ever there was one, whatever went on in those lanes wasn't leisure whatever way you looked at it, and I was looking at it through one good eye and a lot of water, flailing arms and legs etc etc).

Next mishap - rinsing my new goggles waiting for our heat to start, a splash of water whipped my right contact lens up into the back of my eyelid where it stayed through the event - I eventually got it out at teatime! So, the advice about losing them in the water was complete nonsense - I thought I'd never get the bloody thing out!

After an eternity in transition- having seen the results I can only think I had time to build another bike whilst I was f***ing around getting my cycling/running gear on, it was off on the bike.

What a farce! Due to the number on front/ number on back chaos I'd opted for number on front and turn my shirt round for the cycle ride.......bad, bad move as my energy bar then my gel bag skittered onto the road from my now front facing rear shirt pockets, before I got to the corner at the Cross Keys, where incidentally, the small saddle bag with my spare inner tube also parted company with us, the way things were going, if bits continued to fall off there seemed to be a good chance that just me and the bike frame would be together by the time I hit Great Salkeld...

I'd also realised I'd forgotten to put on my 'specialist anti - fly sunglasses', and spent the entire ride waiting for the inevitable fly to hit my remaining and unprotected left eye, thus causing blindness and the inevitable crash ( lucky for me, I got away with it!).

After another hilariously long transition - what had I been doing? I thought I'd been quick, but the result times don't lie - had I sauntered off to chat to other idlers in transition- I don't think so; I did have to receive a telling off from the referee about taking my helmet off before I'd racked my bike, and I did spend some time wondering what, exactly, did she think would fall from the sky in the middle of the astroturf onto my unprotected bonce that the helmet was meant to be protecting me from (incidentally, what was that wasp doing in the middle of an artificial football pitch with no flowers within hundreds of metres....?)- I set of to do the run, and very quickly that was it - EVENT COMPLETED!

Apart from the final bloody nail in the day, the icing on my fragile sponge cake, the dream topping on my angel delight - that bogging awful photograph!

Strangely though, I think I might have another shot next year as I've worked out that if I don't improve AT ALL in the main events - swimming, cycling and running, but knock seven and a half minutes off my transition times, I'll move up seventy six places in the standings to a very respectable position!
Posted by Andy S at 5:39 PM

Hilarious rendition of Sunday's events in all their glory..! Almost wish I'd had as action-packed a tri as you..but then again, maybe not..

Well done Andy, and to everyone else completing their first triathlon. And huge commiserations to Dave with the puncture...it could have been any one of us..
And a big ta to all the Eden Runners who helped marshal on the day. Fab.