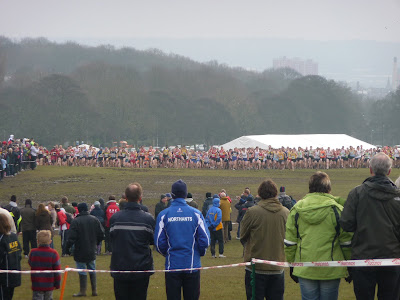 Oh no - here they come

We were here. And here, on this day, was Roundhay Park on the northern outskirts of the City of Leeds, in West Yorkshire. Several thousand other people were here too. The occasion was the English National Cross Country Championships 2010.

This event is held at a different location each year, and each runner represents his or her club in a battle for supremacy over their rivals. Although of course each runner hopes for a good personal performance, there is intense but (mostly) good-natured rivalry between competing club teams.
We arrived in good time – first race was to be 11am - parked and set off through Roundhay to see what lay in store for our race at 3pm. At these events, having made the effort to get here, it is always entertaining, not to say daunting, to watch as many of the races as you can. This helps the apprehensive runner to understand the nuances of the course. It also reminds you how very, very fast a lot of these people are....

There were only three of us on the day to compete in the Senior Men’s race. That is Dave Sargent, Mark Bissell, and myself. Plus our team support Holly of course, who met up with other Penrith-based peeps representing Border Harriers today. Derek Hurton, who had instigated our attendance in the first place, was unrepresented on the day, due to injury. Or so he said....he has yet to produce a doctor's note.
And then of course we were also there to watch Megan Bates, running in the U13 girls race at 12.10, and Matilda Lowther in the U15 girls at 12.55, both representing Eden Runners junior section.
So under leaden grey skies, with snow flurries on the freezing north wind, we watched, clapped, waited, and tried to keep warm by running from point to point on the course. That’s when we weren’t queuing at the increasingly over-used portaloos. 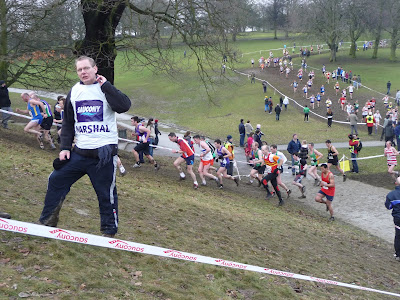 Ignore that bloke - just look how steep the hill is!

The course was a challenging creation of rolling hills, with many twists and turns, hideously clarty in several places, through the parkland and round the lakeshore. Almost all of the races were run over different courses, ranging from 3k for the U13 girls through to 12k for the Senior Men. All races contained at least one steep, fast descent and the payback, an even steeper, longer climb. The courses were all taped off and closed to spectators except at the numerous marshalled crossing-points. 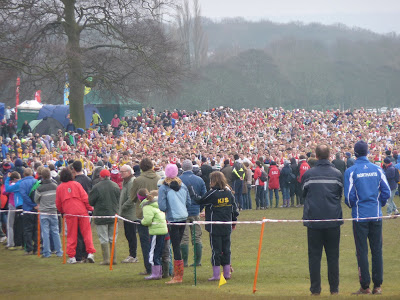 Seniors Men's Race ....yes, we were in there somewhere...
The event timetable was adhered to rigorously. Each runner wore a timing chip, and there was a penned starting system in operation.

In the U13 girls race, Megan managed a top-10 finish, a mere 17 seconds away from first in a field of 417 finishers. As for Matilda, she finished 20th from 360 finishers in the U15 girls. I don’t know if they were satisfied with their races, but they looked impressive from where we were stood.

The Senior Women’s race started while at least 10 of the runners were still going through the quagmire in the pre-start tent. This provided some amusement, with several ladies trying to chase the fast-disappearing race while trying to put on spikes and pin numbers on etc. That was to be the last time I would laugh for at least 90 minutes..... 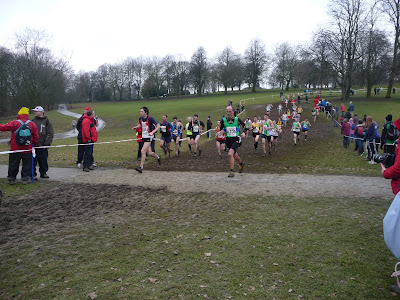 Dave was able to levitate right across the road...

The penned start system proved to be a bit chaotic once you were in there, but it made no difference to me. I loitered near the back, relaxed, knowing I would do well to finish in the top 1000 in this race. No pressure. My plan was to let the racers get away and just run how I felt. We had to run 3 laps, with the added benefit/pressure of thousands of spectators lining the course. The gun went, and like a herd of wildebeest sweeping across the Serengeti, we set off. 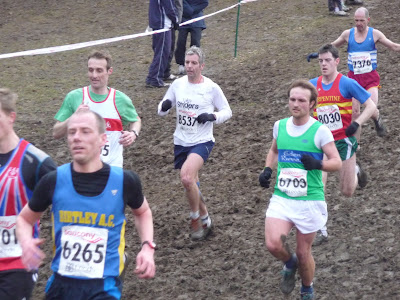 And within less than an hour, it was over. The third climb up Massive Hill proved fairly hard – think top-part of Graham Street covered in mud taken as a sprint – but then that’s exactly what you’d expect. 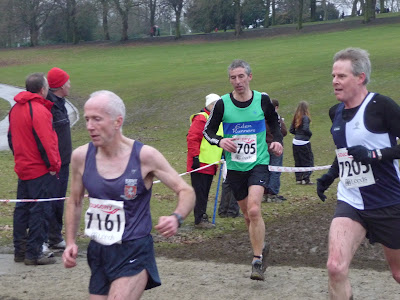 In all, 4301 finishers across 10 different races. A proper Day at The Races.