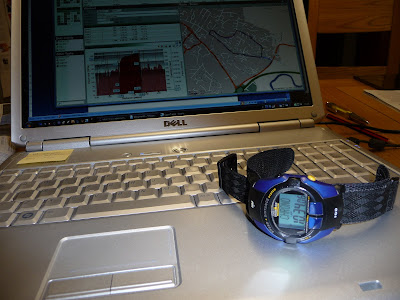 7pm, somewhere in Northern England. At the warm-up, there was more discussion about food than there was about running. I think that’s natural, as no-one wants to talk about a time trial beforehand. The thought is too painful. We all just want it to be over, no-one cares what time they might get. It’s only 1.75 miles - too far to sprint but too short to relax within.

Debutants Karl Allen, Mark Burns-Cassell and Emily Heaviside should be pleased with their results. Incredibly, Paul Saager achieved his fastest time since records began in Oct 2003, with 11:15. Proof that being a Middlesbrough FC supporter need not be the kiss of death it is generally believed to be, and reward for a winter of diligent training.

And equally incredibly, Gill DSD also achieved a lifetime best with 13:17. Proof that being married to Andy has not led to a fatal tailspin in her running career as some feared.

Perhaps not quite so incredibly, Gill’s husband Andy got down off his chair to surpass his own previous best with 11:55.

Other PBs on the night – well done to Chris & Vicky Boyd, to the up & coming Shaun Graham, to John Nicholson, Steve Patterson, to the dark destroyer Kev Scott, and finally to Angela Watson. Angela capped a good few days after demolishing her 2010 time at Grizedale on Sunday by a full 9 minutes.

There were one or two PWs (no names of course), but all would be able to cite mitigating circumstances I’m sure.

Poignant moment of the evening – Sally Spence decided not to run, having been the only ‘ever-present’ at this club event to date. So her run of 14 consecutive TTs stops there – who can hope to beat that? Instead, she was Chief Name-Taker on the night, and I have to say her written results were easily the neatest I have had to transcribe in living memory. Well done Sally.

Thanks also to Mr Andrew Bell (Starter), Kevin Whitemore (Security), and Dave Peacock (Rabble-Rouser and Chief Heckler). Never have so many owed so much to etc etc...

So, did the winter training work? Or were a lot of people just trying harder this time? You decide.......