KWL - OUT WITH THE LUNATICS! 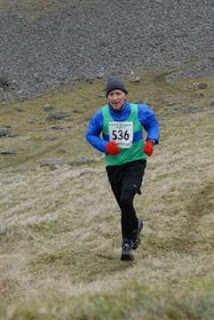 That's it! I set out to do a minimum of 7 racesin the KWL and hit the target on Sunday at Austwick, a gem of a place in Gods own County, although, thanks to Mrs D-S-D's navigation skills we nearly ended up stuck down a farm track nowhere near the race venue!

As usual we were sceptical about Rhiannons description 'one of the nicest of them all this one', but, at last, she got it right!

She'd no control over the weather though, and I thought we were out with the loonies as we huddled, on our haunches, behind a dry stone wall, as the hail lashed across us (not down on us, but definitely across us), in a pose which Sally described as 'the penguin position' ( just what goes on in her life outside of running I can only guess....). You may know that Mrs D-S-D wants a dog, and, as she did a 'warm up' run which seemed to involve dashing 5 metres away from us and five back, over and over and over again, Rhiannon pointed out that this was exactly how a demented collie dog would behave - do I need to look at the four legged option, or simply encourage her doggy behaviour and get a mirror?....

This race across some of Yorkshires finest scenery was unique in so far as it's the first time I've been in any race where the competitors had to QUEUE to get over a stile - disheartening this, as in my usual panic to put distance between myself and Rhiannon I'd opened a useful gap of about 70 metres, only to look round and see her half a metre behind, and next but one in the queue!!

Another first was the dry stone wall we had to climb over, although I didn't see them, the underachieving Virgo twins apparently took an age to negotiate this obstacle, living up to all the qualities their star signs suggest......

This was a good race, we even had fun pushing a blokes car off the verge after he got it stuck in the mud. We were the first to offer help and he insisted that one of the girls drive while he helped to push, so Mrs D-S-D drove while Sal & I helped to push- it was going nowhere, until more and more departing runners arrived to lend a hand and we eventually got it free.....Oh how we laughed as people assumed that it was the lady driver, Mrs D-S-D who'd driven it in there in the first place!

She didn't laugh quite as much as we did, but then again, nor did she repeat the 'foul and abusive' we'd had directed at the Tebay Cyclist some time ago.

A little bit of syncronicity with my last race of my first go at the KWL being in my 'home' county,
and I will be looking forward to my second go at this next season, now I know what to expect - the unexpected! The people have been friendly and encouraging, even though they were competitors, and I've a little store of good, and funny memories, hope you've enjoyed sharing them too!.

By the way, this league started with one ER in it, and ended with four, so good to see the green and blue shirts out, and Rhiannon's in the top ten (seventh I think) in the Ladies championship, so well done to her too! 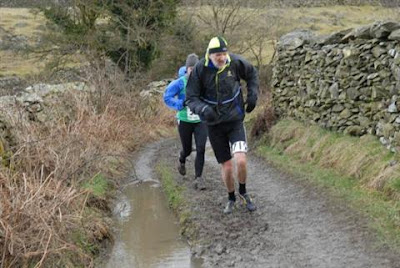 Always polite, the Eden Runner ladies thanked Dennis at the end for providing them with a wind-break on the windier parts of the course...
Posted by Andy S at 9:58 PM

Brilliant comment on the 'Dennis' photo - should make a card of it!

Brilliant comment on the 'Dennis' photo - should make a card of it!

Well done on a cracking load of blogs.

If there was a glass-blob prize for endurance blogging, you'd have it, hands down!

Well done Andy, you are a true luatic (ergo fellrunner!)