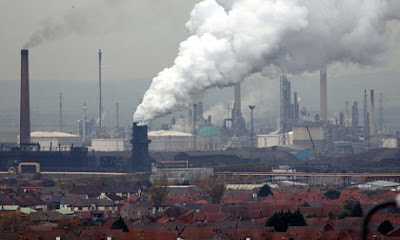 I am leaving the scenic Lake District and driving towards the land of the chemical plant, Teesside. Worse, it’s pouring with rain, one of those days when you can’t see where land meets sky. Everything is grey, grey, grey. Worse still, I know that when I reach Redcar, I will have to race 13.1 miles, in the rain. And, I had thought I’d be travelling with fellow ER Mike, but he’d had to withdraw at the last minute, not feeling well. On top of all that, England had kicked off their 2010 World Cup campaign last night in rather miserable fashion, failing to beat the USA. Surely, things would have to get better……

I know that the race start and finish (and the route, come to that) have been changed since the 2009 race, which was in April. This time, we're here in the middle of June, so the Redcar Half Marathon is undergoing an almost total transformation.

So, somewhat downcast and with expectations hovering just above the ground, I drive into Redcar and follow the race park & ride signage, eventually reaching the racecourse carpark in still-torrential rain. Two bedraggled marshals in yellow binliners direct me to park next to another 7 or 8 cars huddled in the vast emptiness of the puddly tarmac. I sit there for several moments, seriously considering whether to drive straight back home. No. I get out, get my bag, and walk as briskly as I can towards the waiting bus.

There are 4 of us on the bus. And that includes the driver. The wheels on the bus go round and round, splashing through the streets of Redcar, until at journey’s end we are all told to get off. Basically, we’re in a housing estate in the pouring rain, with no indication whatsoever of where the race start may be. Until someone thoughtfully asks the driver just as he speeds off, and it transpires we just have to go round that corner. We do that, and here we are on a large field extending across to the coast road and the sand-dunes. Behind that is a huge grey expanse. It’s either the sky or the sea, or both.

A large white marquee houses the baggage area. It’s so early that it’s virtually empty, so I find a seat and sit huddled in my coat and sulk, looking at the rainwater teeming off the roof onto the sodden grass. In this way, I while away half an hour or so, watching sandmartins skimming the turf, dodging the increasing numbers of runners frowning their way across the field. Why do we all frown when we have to go out in the rain? What purpose does the frown serve? I conclude, after extensive testing, that it is to lower our eyebrows so as to reduce the likelihood of water ingress to the eyes. See, every day’s a school day, kids.

Anyway, it’s time to warm up now. I get onto the tarmac and find that the race announcer is singling anyone with a visible race number out for special treatment. I quickly try to cover mine up but too late. ‘Number 472 is Alan Marshall from Eden Runners, welcome Alan from the people of Redcar!’ A surprisingly loud cheer goes up from the crowd. Eh? He soon picks on someone else but my attention shifts as I notice the rain has stopped and the clouds are beginning to break. It’s suddenly become perfect weather for running - cool, damp underfoot, a light crosswind. After the usual pre-race formalities (sponsors mentioned, organisers thanked, stupid running-related metaphor-based attempts at humour, etc) we are underway to the sound of Bruce Springsteen and the E-Street Band and ‘Jungleland’ – possibly the best piece of music ever, bar none.

We head south towards Marske, and mile one is reached with minimal effort and at a good pace, whereupon we turn round and head north up the coast back towards Redcar. To my right the sun glints off the deep blue of the North Sea as a flotilla of colourful yachts race south. Swallows and sandmartins swoop and dive across the grass and dunes. Mile 2 and I continue to steadily move up through the field, feeling really comfortable. I go through the start/finish gantry again where music is still playing, this time it’s the impeccable ‘Higher Ground’ by Stevie Wonder. This really is a first - a race with musical taste. Mile 3, into Redcar where the interesting seafront streets are festooned with flowers and packed with enthusiastic spectators. To my right, a beach volleyball match is in full swing. As I run past, the Brazilian Ladies Team lead Coatham Cruisers 6-5 in the 3rd. What a sight.

The first drinks station is themed (each one has a different ambience) around Raiders of The Lost Ark. The idea here is that you don’t have to stop, but you point to a particular person (all in character) as you approach, who then breaks off and runs alongside you with a range of refreshments for you to choose from. I ask Indiana Jones (sorry, Harrison Ford) 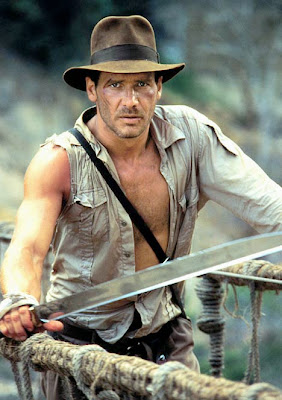 for a water, please, which is instantly given to me in a small bottle with the top already removed. It’s the little things that count. I take three or four mouthfuls and then Indy takes the bottle, offers me a white towel to wipe my face and asks if I want anything else. He has energy gels, jelly cubes, squares of chocolate (dairy milk and dark), a full Victoria Cream Sponge on a tray, and a bullwhip. I decline, and press on.

I have to say that the atmosphere on the course is tremendous. I have apparently been assigned a support team who move silently along beside me in a kind of milk float/golf buggy-type thing, offering encouragement, humorous asides and good conversation. It’s like running with Paul Saager, only faster. I am pushing my physical limits here but I barely notice, so much am I enjoying myself. I request some fitting music, and I am given ‘Tick Tick Boom’ by The Hives to speed me on my way. Perfect.

Mile 6 to 10 are along dual carriageway tarmac running towards and then alongside British Steel, formerly Corus, previously British Steel. It seems the place has been rejuvenated, now employing 27,000 people and exporting to 36 different countries since the recent takeover by a workers cooperative, led by former PM Gordon Brown and Juninho, the diminutive former Brazil and Middlesboro midfield maestro. In this spirit of rejuvenation and renewal I glide effortlessly along, passing Steve Ovett and Sebastian Coe joining in a game of 5-a-side at the turn-round point. Perhaps unexpectedly, Coe fires a spectacular volley in from long distance just after Ovett has belted one in from close range. Those boys, eh?

I am offered a change of footwear and, although I have misgivings about losing time, I opt for a pair of New Bollocks AirHead racers. Apparently I have chosen well, although expensively. But my support crew advise that Steve Cram is paying – one of the perks of being entered for the upcoming Kielder Marathon. Cheers Steve, nice one.

A thin line of pink & red out on the foreshore tells me that the Teesside flamingo population is thriving, and I begin to wonder if I’m hallucinating. However I am immediately jolted back to reality as a slice of M&S lemon swiss roll proffered by Michelle Pfieffer on roller skates helps me into the final three mile stretch to the finish. The yachts out on the azure waters have been replaced by schools of dolphin, and a pod of Orca cruelly taunting what looks like Ben Fogle in a kayak. That raises a smile, although the Killers have the upper hand from what I can see as I run past. Ben is vainly attempting to posh-charm his way out of this rather tight spot. Put it this way – I don’t think that match was heading for extra time. Meanwhile, the film crew on the big boat are all taking bets with James Cracknell on how many bites it will take until Ben can't emote to camera any longer. You couldn't make it up....

The finish funnel is a riot of colour and music and wild applause as I approach... The announcer spots and namechecks every runner at the run-in, and gives a quick opinion, based on the finish time, of each runner’s performance. I have to admit that hearing the words ‘Don’t give up the day job Alan’ at 140 decibels is not what I want to hear as I approach, but I have to admire the brutal honesty. The clock on the finish line is a specially-built recreation of Big Ben, only digital, and as I fly through the tape – yes, they put a finish tape up for everyone to break through – I am handed a small bouquet of flowers and directed into a large marquee. The post-race massage is very welcome, as is the cup of tea and portion of freshly-fried chips (vinegar, no salt) which is placed in my hand as I leave the finish area. There are no commemorative t-shirts (I am told that they have been mislaid by someone at the Club - as if that could happen), but we are presented with a choice of non-chafing base-layer running gear, available in every club colour combination you could think of, and all in either natural or man-made fibre. And some socks. And a massive yellow shoulderbag to put all of this stuff in. Overwhelmed doesn’t get near it. 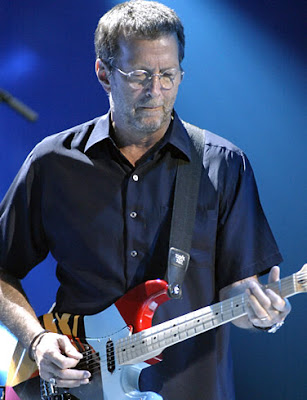 So, as I stepped blinking out into the warm afternoon air, acknowledging in passing the legendary Eric ‘Slowhand’ Clapton sat on a stool playing the Blind Faith classic ‘Can’t Find My Way Home’ ( I actually threw a couple of quid into his guitar case, and he said ‘cheers Alan - good finish by the way’) very quietly so only I could hear), I paused to reflect. I sat on the comfy seat on the bus back to the car-park, gazing at the sunlit streets of Redcar and drinking my complimentary iced tea, and remembered how negative I’d felt upon arrival. Sometimes we expect the worst, but, if we persevere, good things can unexpectedly occur.

My car is still there, looking clean after the morning rain. What a pity that no-one else from the Club had got across for this one. I’m fairly sure I’ll be back next year, but can’t guarantee that the experience will be the same. All I can do is relate the facts to my clubmates, and hope that one or two may be enticed to join in the fun.